£47/32.50 Adv (+Booking Fee)
Entry Requirements: Children under 15 must be accompanied by an adult aged 18 or over. Children under 16 cannot enter the standing area.
Buy Tickets
Share Tweet Add 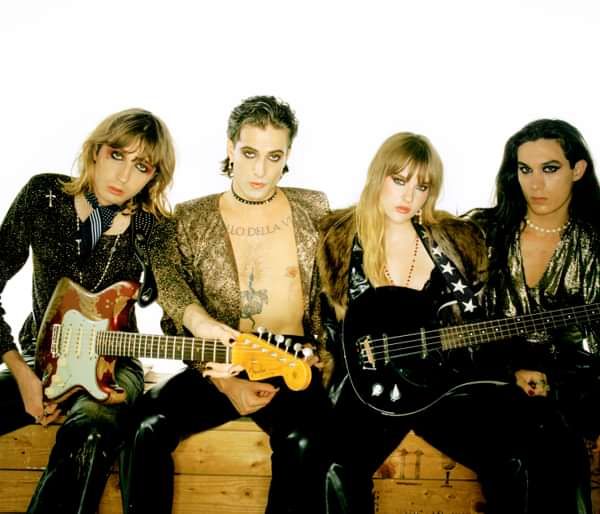 2022 / 2023 DATES ACROSS NORTH AMERICA AND EUROPE ** **Måneskin announce details for their first world tour today, which will consist of 48 dates spanning across North America and Europe. The LOUD KIDS tour dates have expanded to include the band’s very first headline tour of North America, as well as upgrades and additions to their re-scheduled European indoor shows due to popular demand.

Commencing on 31st October 2022 in Seattle, the tour will see Måneskin play 16 other North American cities - including stops in New York, San Francisco, Las Vegas, Washington and Cana-da – before embarking on their rescheduled European tour in 2023, plus new dates . Due to popular demand, Måneskin have upgraded their European shows to iconic venues including London’s O2 Arena, Accor Arena in Paris and Berlin’s Mercedes Benz Arena, as well as addition-al dates in Spain, Denmark, Austria, Latvia, Estonia and Italy.

General ticket sale begins on Friday, March 25th at 10am local time in the US / 2pm (CET) in Eu-rope.

For all tour dates, tickets, and information, please visit:

In a statement today, Måneskin wrote:

“We’re so thrilled to be able to finally tell you that our LOUD KIDS tour got sooooo much louder, truly worldwide!! The LOUD KIDS tour gets louder and will actually see our very first headline tour in the US. All our rescheduled European Indoor dates have been upgraded due to demand + we’ve added some new ones for all of you who missed the chance to get their tickets.

Of course, it is very difficult to make show announcements while the horrific war in Ukraine goes on and innocent people are suffering. We are devastated for the Ukrainian people and we stand with them in solidarity. And due to the decisions of the people in power, that affect the lives of so many innocent people, we will not go ahead with our Russian dates. We all need to stand together for peace, now and always.”

Tickets purchased for the 2022 tour dates remain valid for the new dates announced today. All outdoor shows including Verona, Circo Massimo and Lignano Sabbiadoro will go ahead as well as their appearances in all Festivals already announced. For all of the information related to can-celled Russia shows and the suspended Ukraine show please visit: www.savshow.com

2022 will see the fast rising band warm up for their North America tour dates with a group of major festival appearances this summer, including Coachella, Lollapalooza, Reading & Leeds, Rock in Rio, Pinkpop, Rock Im Park & Rock Am Ring and more. After a year of success, with 7 diamond discs, 161 platinum and 37 gold, the Italian rockers have cemented their global status in some of the largest music markets around the world. Last year saw Måneskin conquer the UK with their smash hits “I Wanna Be Your Slave” and “Beggin’”, becoming the first Italian band in history of music to crack the UK Top 10 Chart with two singles simultaneously. And when they put their new European tour on sale, all tickets sold out in the space of two hours! Other achievements include their double nomination at The BRIT Awards 2022 for ‘International Group’ and ‘International Song’, as well as their MTV European Music Awards win for ‘Best Rock’, the first ever win for an Italian artist in an international category plus Premios Odeón for ‘Revelación Internacional’. Their triumph in the US has been just as impressive. Måneskin held two special concerts in New York and Los Angeles and were special guests at The Rolling Stones’ concert in Las Vegas. They have also performed on prime TV shows, Jimmy Fallon’s Tonight Show and The Ellen DeGeneres Show, and did an outstanding performance of “Beggin’” and ‘I Wanna Be Your Slave” for their debut appearance on Saturday Night Live.

The rescheduled European tour dates plus new ones are as follows: