SOLD OUT!
Entry Requirements: No under 8’s. Under 14’s with an adult 18+ and seated in the balcony
Share Tweet Add 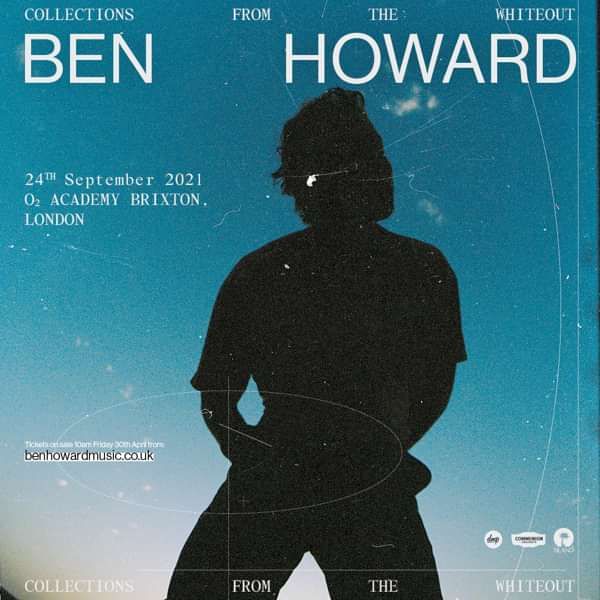 Tour In Support Of Howard’s Recent Number 1 Fourth Album, Collections From The Whiteout.

Ben Howard follows the recent release of his fourth album with three new headline dates in the UK this September.

The acclaimed British musician debuted at number one in the UK last month with Collections From The Whiteout, his second chart topping record of an already distinguished career.

Ben celebrated the record’s release with a livestream broadcast from Goonhilly Satellite Earth Station in Cornwall in April.

Ben now brings that live show back to more traditional means and in front of live audiences in September, headlining The Eden Sessions at St Austell, Cornwall, Manchester’s Victoria Warehouse, and London’s Brixton Academy. The new dates bookend his previously announced sold-out shows at London’s Royal Festival Hall on the 18th and 19th September. Ben’s new show in Brixton will be his tenth headline date at the venue.

Tickets for the Manchester and Brixton dates go on sale from Friday 30th April at www.benhowardmusic.co.uk – visit www.edensessions.com for full programme on-sale dates for Ben’s date in Cornwall.

Ben Howard will fulfil his ‘out-store’ performances in Newcastle, Edinburgh, Bristol, Leeds and Kingston before embarking on these shows. All out-store shows are long since sold out.

Collections From The Whiteout signalled Ben’s most ambitious and collaborative record to date. As uncompromising as it is engrossing, Ben and producer Aaron Dessner sculpted a record of deeply meditative and soul-searching songs that retained the adventurous and experimental side of Ben’s recent output, but also arguably his most immediate since 2011’s breakthrough debut, Every Kingdom.