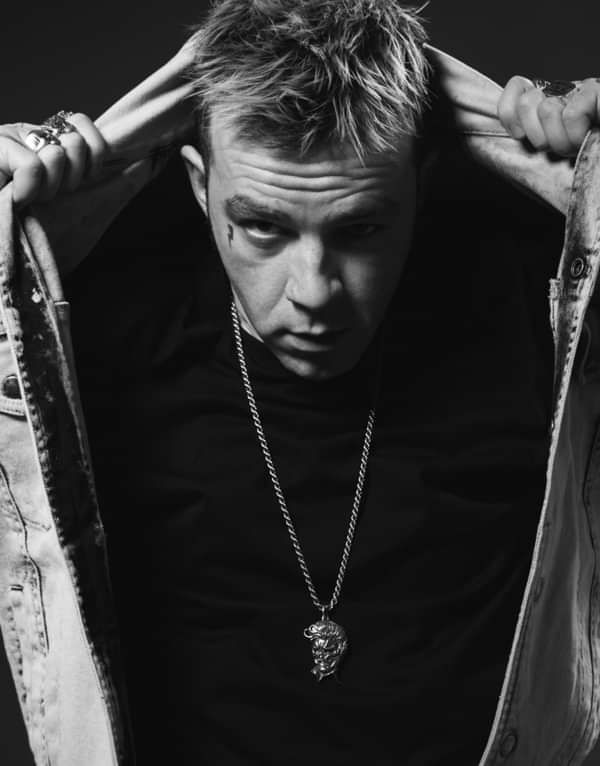 SALMO (Maurizio Pisciottu, born in 1984) is a pioneer of music who, joining the rap scene, has been able to change the features of this genre, introducing elements of electronics and rap as it had never happened before in Europe.

In 2011 he produced his first solo album, “The Island Chainshaw Massacre”, which mixes electronic sounds and ‘90s rap features, introducing a distinctive and revolutionary trait in the Italian rap scene of that time. Only a year later, the artist gave life to “Death USB”, immediately ranked first on the iTunes chart.

In 2013 he released “Midnite” (platinum record), reaching the first place among the best-selling albums in Italy. With the single “S.A.L.M.O.”, he obtained the platinum certification. One year later, the new label “Tanta Roba” was founded and this marked the start of his new project in Machete Empire. 2014 also saw the birth of the booking and management company “Lebonski Agency”. Thanks to his skills as a director and a video maker, Jovanotti chose him to direct the video of “Sabato”, edited together with Nicolò Celaia and Antonio Usbergo. A year later, Jovanotti invited him as a special guest on his stadium tour.

In December 2015 Salmo released “1984”, gaining the double platinum record after only one day. The single anticipated the album “Hellvisback” (February 2016, double platinum record) which debuted at #1 of the iTunes and FIMI charts, remaining stable for two weeks. Singles “Don Medellin” (2016) and “Estate Dimmerda” (2017) are certified platinum too. In November 2017, Salmo published the single “Perdonami”, certified triple platinum, with 495.971 streams on Spotify in just 24 hours – record of the year. Between March and April 2017 he walked the stages of the most prestigious European Festivals in Madrid, Barcelona, Paris, Dublin, London, Berlin, Brussels, Amsterdam and Thessaloniki, with over 50 live concerts in Italy.

The live activity has always been very important for the artist’s attitude, who is able to find his natural dimension on the stage. After three epic sold outs in the arenas of Milan, Rome and Vigevano in December 2018, Salmo returned to perform live in the biggest Italian arenas in March 2019 with his “PLAYLIST TOUR 2019”, an impressive series of sold out concerts and an exclusive show on July, 12th 2019 in Rock in Roma, with 35.000 tickets sold.

The “PLAYLIST TOUR 2019” recorded an audience of over 260 thousand spectators. After breaking all the records on Spotify, dominating the FIMI-Gfk charts and exceeding over 412.9 million views on YouTube, SALMO has also been the first Italian artist to exclusively launch a music video on Netflix, with a dedicated channel on the famous “PornHub”, where he launched his new album “PLAYLIST” thanks to an original marketing process. The album is already certified quadruple platinum record and reached the largest number of streams in 24h (9.956.884) on Spotify Italy in the day of its release. It also reached the largest number of streams in a week (43.882.595). Moreover, it is the first time that an Italian artist places himself in the Spotifym Global Chart with 8 tracks.

“Playlist” entered directly into the 1st place of the FIMI/Gfk official album chart and totally conquered the podium of the best-selling singles, where all the 13 tracks of the album were included in the top 16.

At the beginning of Summer 2019, Salmo launched the “Open Sea Republic” project with Red Bull: from June, 21st to 23rd a GNV ferry (Grandi Navi Veloci) became the setting for a special 36hours festival directed by Salmo. Ship’s spaces were animated day and night with dj sets, live concerts and showcases with Salmo and many other artists, producers and DJs. In addition to music, various activities dedicated to video games and cinema were planned throughout the journey.

SALMO is a pioneer of music who, joining the rap scene, has been able to change the genre’s features, introducing elements of electronics and rap as it had never happened before, now ready to conquer the world with his “PLAYLIST 2020 WORLD TOUR”.